The Republic of Austria is located in southern Central Europe. With an area of 84,000sqkm (approximate size of Arunachal Pradesh) and 8.3 million population, it encompasses the Eastern Alps and the Danube Region. Austria has been at crossroads of travel routes between the major European economic and cultural regions. Austria is land-locked, sharing borders with 8 countries: Germany, Czech Republic, Slovakia, Hungary, Slovenia, Italy, Switzerland & Liechtenstein. Austria is a federal state comprising 9 provinces: Burgenland Carinthia, Lower Austria, Salzburg, Styria, Tyrol, Upper Austria, Vienna and Vorarlberg.

Austria became an important force in central Europe with the formation of the Habsburg Austro-Hungarian Empire in the 15th century. Following its defeat in World War I, the former Empire gave way to the present-day Republic. New constitution was adopted in 1918. Democracy was suspended in 1933; German Reich occupied Austria from 1938-1945. After WW II, Austria participated in the Marshall Plan. The 1955 State Treaty — that granted sovereignty from Allied powers – declared the country ‘permanently neutral’. Austria is a member of the European Union since 1995, and adopted the Euro currency since its introduction in 2002.

Austria is a democratic republic with a bicameral Parliament. The 183-member National Council (Nationalrat) is elected directly by the people. The 64 members of the Federal Council (Bundesrat) are delegated by the provincial parliaments. Head of state is the President (Bundespräsident) Mr. Alexander VAN DER BELLEN (since 26 January 2017). Head of Government is the Federal Chancellor (Bundeskanzler) Mr. Sebastian KURZ (since 7 January 2020) and the Vice Chancellor is Mr. Werner KOGLER (since 7 January 2020).

Around 65% of the population is urban. 98% of the Austrians speak German. 78% are Roman Catholic, 5% Protestant, 9% non-denominational. The ethnic minorities in Austria include — Croats, Slovenes, Magyars, Czechs, Slovaks and Roman. Population growth rate is estimated at 0.25%. Vienna, Graz, Salzburg and Innsbruck are the main Austrian cities. Austria has 18 universities. The University of Vienna, one of the oldest universities in Europe, was founded in 1365.

The average temperature in summer is around 20°C with maximum temperatures of around 35°C. In winter temperatures can be as low as –15°C, although the average is around -4°C. There can be especially heavy snowfall in the mountain regions. Highest rainfall is in May and June.

The most important waterway is the Danube. The largest lake is the Neusiedel Lake in Burgenland - around 77% of its total area of 315 km² is in Austria, the rest is part of Hungary. The Attersee Lake has an area of 46 km², the Traunsee is 24 km². Also, a part of Lake Constance (Bodensee), 24 km², lies in Austria (from a total area of 536 km²). 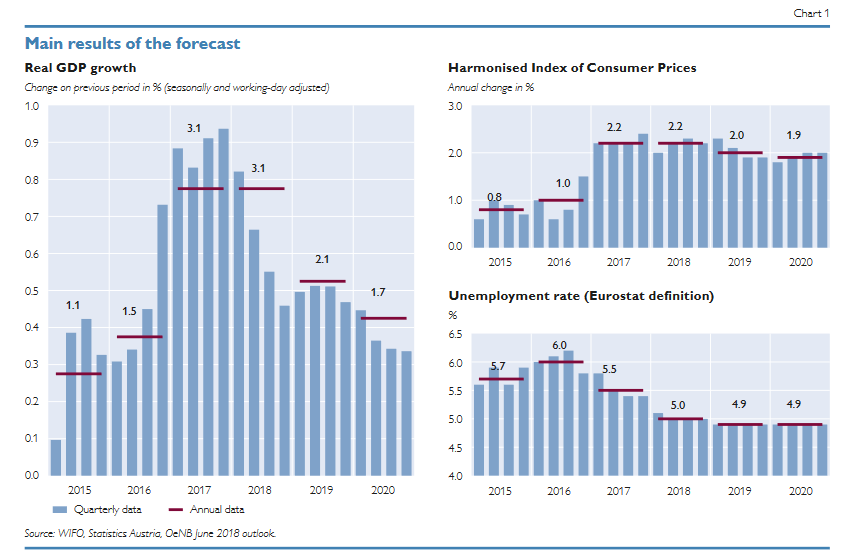 Austria, a member of the European Union since 1995 is an important link for India in its relationship with Europe, especially with countries of central and Eastern Europe. The Indo-Austrian Joint Economic Commission (JEC) established in 1983 is active and on-going (15th session was organized in India on 20 July 2017) between the governmental Ministries and Chambers of Commerce and Industry of the two countries. There has been cooperation in the fields of steel, manufacturing technology, railway and transport, equipment, metallurgy through a large number of collaborations, technology transfers and joint ventures.

The latest figures of India-Austria bilateral trade are: